what’s the best pictureviewer for xp/vista?

First, a bit of history:

before XP, I used acdsee on win98/win2000/nt but the person who developed this thought it was a good idea to put tons of useless features into it without thinking about the fact that an application needs a intuative userinterface, and then decided that it also needed nagscreens, banners and other irritations. So goodbye acdsee. This frankenstein is killed some time ago by it’s creator and now lives on as a zombie.

On XP i’ve been using the standard windows picture viewer, which is simple and good. It shows all my snapshots and allows me to browse and print them. In combination with explorer, you hardly need anything else.

But what about the other popular formats, most importantly png and psd (photoshop) files. Because microsoft does not seem to like them they are not supported by the standard XP viewer. And then you might want to do some simple editing, like rescale or contrast correction on a few pictures. At that moment, you realize thet you need an alternative.

Well, vista finally arrived. And with it came the brand new photo gallery and solved all my problems…not. Although png file support is ok, psd files (from microsofts big enemy adobe) is still not supported, and the edit possibilities are still minimal.

Then i tried picasa, but that is not a picture viewer, it is a digital photo album.

so my wishlist was as follows:
– at least jpg, gif, png and psd format support.
– some simple editing options,
like scale, crop, contrast/hue/brightness, rotation, flip
– a real picture viewer with explorer-like file management.

In comes irfanview. This seems like a decent picturemanager, but it has a lot of drawbacks. First, the brain of the developer and my brain seem to be so different, that nearly all defaults are wrong. If you click on something, it always does NOT do what you want.
Example: the save-floppy icon is save-as, not save as you expect. Also, try to get the picture scaled to the window automatically, but keep its ratio. This should be the default setting, but in irfanview you need 20 minutes to figure out how to do this.
Then, try to edit a picture. You need to wade through hundreds of options, none are relevant until you find out it can not do what you want.
Finaly, irfanview is incredibly slow. The XP standard viewer shows pictures on avarage 50x faster than irfanview.
Conclusion: irfanview is bloatware that needs a serious rewrite. Its an application only a mother could love.

Then I found xnview. XnView is a better viewer in all aspects than irfanview or acdsee. It has a better userinterface, has a lot of options and features, and they are placed in the way you would expect them, its very fast and supports a lot of fileformats. A big advantage is it’s browser screen which has a good explorer-like feel. And it’s free.
The main disadvantage is that it also tries to implent too many features and options, but it does not become completly unusable, and the defaults are well chosen. Furthermore it does not have a modern userinterface like picasa.

What is it that picture viewer developers seem to think that the number of features is more important than the usability? Do we need to wait for windows7 before we get a decent picture viewer/editor in windows? Or is there a viewer that can do simple editing and is fast and passes some simple usability criteria?

the IE6 to IE7 upgrade

I’m using firefox as my default browser, but for testing and development i need explorer every once in a while. A couple of weeks ago, my microsoft update asked my to upgrate to IE7. So why not? well, always reluctant to install microsoft stuff, but if everybody uses IE7, i should at least test websites for this new browser.

So i installed IE7. What a bummer! I got an icon, but that was about it. Clicking the IE7 icon shows the hourglass for a fraction of a second, and then it exits immediately. So i uninstalled it and installed it again. Nope.. Then I reinstalled IE6. Works fine! END_OF_DOCUMENT_TOKEN_TO_BE_REPLACED 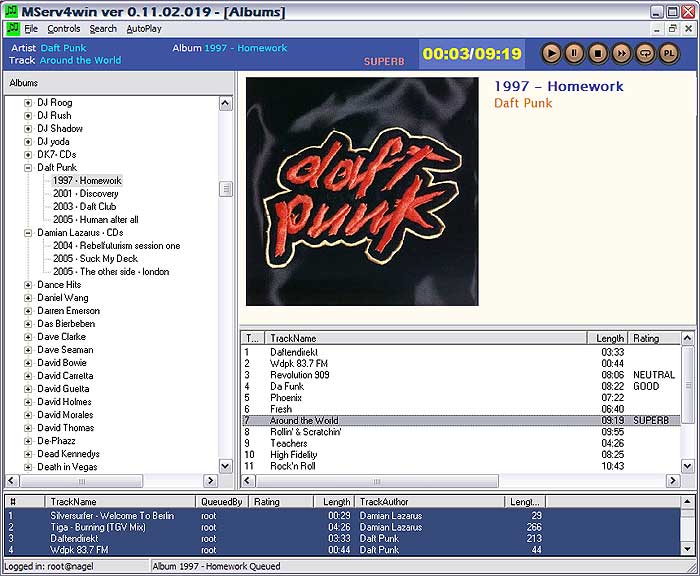 Already for a few years, i’m running MSERV, a great opensource mp3 jukebox which is completely client-server and has a good rating- and genre system which allows it to play random music that corresponds to the current mood, current lister etc.

You can rate numbers as superb, good, normal, bad, awful etc. and it takes this into account to play numbers more or less often, depending on your rating. Everybody can rate, so this is a good jukebox to use with a group of people.

There are a few clients available, and I’ve taken MservClient as a base to further develop the windows client. MservClient is written by Marco Schulze and Marc Klinger, and can be found here. Because I’ve changed the whole concept of MservClient, I adopted a new name: Mserv4win. Also, there is not much left from the original code of mservclient. Mserv4win takes the look and feel from winamp and puts it on top of mserv.

END_OF_DOCUMENT_TOKEN_TO_BE_REPLACED

The normal case: been busy for my latest project, and after a few days of sweat to produce the finest .exe, I dont care about installation and give the exe to everybody “to try it out”. But nowadays, that’s hardly acceptable: nobody expect an application to be “just an exe” that you need to put in a /program files directory yourself. So what’s availbale?

I’ve been using InnoSetup. From a very simple version that I’ve got a few years ago it has grown to a full blown installation program. It support scripting, is multilangual, and there are aven a lot of design tools especially created for InnoSetup. So it is the obvious choice for me. But maybe there are alternatives.

There is microsoft, with their msi “technology” which is -as usual- very complex wihout much more features. I hate steep learning curves, so after a few tries, I decided not to use it. The concept is good: instead of writing procedural code, you just define what you need installed where, and it does the job for you. But getting rid of a procedural language should make the job EASIER, not HARDER. And there are no real benefits. So goodbye msi.

Then I investigated the “usual suspects”: Wise and Installshield, the 2 top commecial installers available. Everybody with experience with both told me to skip installshield and go straigt for wise, because it was superiour. Because I had a legal version of wise 9, I tried it. But even this newest version has a windows 3.1 feeling, that you might get rid of with all kinds of patches and images, but in the end you are still stuck without normal Windows XP controls (like the green progressbar) And the wise “language” made me sick. If this is the commercial state of the art, then forget it and go straight to open source, because innosetup is way way superior over wise.

After this experience, I forgot about installshield. If this is not better than wise, it is not worth to investigate further.

And then there is NSIS. This is also open source, and is derived from the winamp installer. It is a comic farting lama counterpart of inno. It looks reasonalby good, at least as good as the wise installer, but also here you get a windows 3.1 feeling which goes away after a lot of “cosmetic” stuff.

Conclusion: Innosetup lives up to its expectations and is still my number one choice.